Following the successful culmination of the first year, Prince Mohammad Bin Salman College (MBSC) announced the welcoming of the second class of students for its flagship MBA program. Over 6,500 local and international applicants applied for the Full Time and Part Time MBA program, an unprecedented growth of over 185% from the previous year. Following a highly selective admissions process, the College accepted the top 118 entrepreneurs, leaders and executives from various industries, sectors and backgrounds. 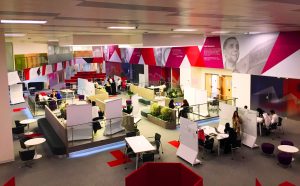 The College’s unique experiential programs have been developed in collaboration with Babson Global (a wholly-owned subsidiary of Babson College, USA, the number one ranked institution for entrepreneurship), with focus on advancing entrepreneurial and innovative growth within the local and regional professional community. To supplement these ambitions, the College continues to introduce distinctive Executive Education and Professional Development Programs for the government, private and non-profit sectors, including Digital Transformation, Financial Trading, Venture Creation and Design Led Thinking.

“The first year has been a rewarding experience that has granted us invaluable insights on how to further differentiate the Colleges educational offerings,” said Fahd Al-Rasheed, Vice Chairman of the Board of Trustees for MBSC,:“ The extraordinary growth in the number of applicants is a testament to the growing confidence in MBSC’s mission, and we will continue to focus on leadership skills and developing an entrepreneurial mindset that graduates can carry into their personal and professional lives.”

Dr. Siddiki graduated from the University of Oxford, and has been involved in the higher education sector for over twenty years. Dr. Siddiki is also a Founder and Entrepreneur and serves in a personal capacity on initiatives for cross-cultural dialogue and understanding.

King Abdullah Economic City (KAEC) is the largest privately-funded new city in the world. Situated on the west coast of the Kingdom of Saudi Arabia, KAEC covers an area of 181 square kilometers of land, approximately the size of Washington DC. KAEC comprises King Abdullah Port, the Coastal Communities residential districts, the Industrial Valley and the Hejaz district, which includes the Haramain high speed rail station. The city is under development by Emaar, The Economic City, a publicly listed Saudi joint-stock company established in 2006.

About Mohammed bin Salman College of Business and Entrepreneurship

The Mohammed bin Salman College of Business and Entrepreneurship (MBSC) is a private institution of higher education for both men and women, located in King Abdullah Economic City on Saudi Arabia’s west coast. MBSC is a business school for the next generation, delivering undergraduate, graduate and lifelong learning opportunities designed based on Babson College’s Entrepreneurial Thought & Action (ET&A) pedagogy and meeting the stringent accreditation and quality standards of the NEASC, AACSB and NCAAA.

MBSC was established through an international partnership between King Abdullah Economic City, Babson Global (a wholly-owned subsidiary of Babson College, USA), Lockheed Martin under the umbrella of the Economic Offset Program in the Kingdom of Saudi Arabia and the MISK foundation.