Drum Roll, Please considers the seismic changes taking place in Saudi Arabia. In a constantly rupturing and settling site and culture, Mater documents the Kingdom’s abrupt and unpredictable upturns and plunges. In five chapters, the exhibition weaves a journey through Saudi’s current feverish pace of flux, its past as a rentier state, the holy site of Mecca, its newly imagined and conjured future, before settling, finally, with the inevitable and quiet full circle of life and death.

Welcoming this landmark event to King Abdullah Economic City, Mr. Fahd Al-Rasheed, Managing Director and Group CEO of KAEC, said: “It is a great pleasure and privilege to host this solo exhibition for Ahmed Mater at KAEC, in partnership with the organizers ATHR Gallery and the Saudi Art Council as part of 21,39 Jeddah Art events.”

Mr. Al-Rasheed went on to say: “At KAEC we aim to become a sustainable incubator for all different activities such as art, culture and social events, and to support national talents. This event, as well as the other artistic and cultural events hosted and to be hosted in the future, contributes added value to KAEC,”
“Today there is a cultural renaissance sweeping through the country as the Kingdom adopts policies that encourage more active participation in the economic growth of the Kingdom by women and young people. This has resulted in an extraordinary period of change, creating new opportunities for young Saudis from all walks of life to participate in the arts as a contribution to the economic and social progress that is part of Vision 2030.”

In the opening Prologue, the viewer is immediately immersed in Saudi Arabia’s fast tempo of change; hearing the eager anticipation for its future, with the video work The Ghost, alongside a video still of a worker riding the golden crescent as it is lifted into place on the Clock Tower.
The second chapter, Urban Traces, documents shows glimpses of everyday life carved out by Mecca’s residents from their barbershops to their kitchens, the space they occupy within the tumult of change and the expansion.

Located in the new King Abdullah Economic City, Drum Roll, Please finds an apt home in one of the Kingdom’s new mega city projects. These rapidly rising new cities in the desert, part of Saudi’s economic diversification from oil, are echoed in Mater’s Fulgurite, 2017 sculptures, to be found in the third chapter Something from Nothing. Rising like the new mega cities from their sand-filled white construction sacks, they too are created by a sudden burst of power into the sand, a billion joules of electricity from a lightning strike. 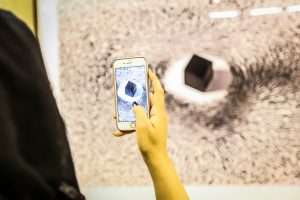 The exhibition closes with its final chapter, Epilogue, where his infamous work Magnetism stands; the works in this chapter remind the viewer that, despite the raucous surges of change, all will still return from whence it came.

The Curator of the exhibition, Jumana Ghouth said: “Ahmed Mater is one of Saudi’s most important contemporary artistic voices, with work that documents the past and looks to the future. It is fitting that his first major solo presentation in the Kingdom comes at a time of dramatic change; it is a prescient moment to consider the narratives he brings to our attention.”
Drum Roll, Please is part of the fifth edition of The Saudi Art Council’s 21,39 Jeddah Arts Initiative. 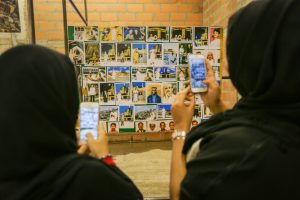 Ahmed Mater (born 1979, Tabuk, Saudi Arabia) lives and works between Riyadh, Jeddah and Abha, Saudi Arabia. A physician turned artist, Ahmed Mater is one of the most significant cultural voices documenting and scrutinizing the realities of contemporary Saudi Arabia and its position and influence in urgent global narratives of faith, environment, socioeconomics and geopolitics. Forging an ongoing, complex mapping of the Kingdom, his practice synthesizes and documents collective memories to uncover and record unofficial histories. Mater combines expressive and politically engaged artistic aims with the scientific objectives of his medical training. Historic, religious, urban and social explorations mine and preserve disregarded and forgotten depths in his documentary and conceptual works.

King Abdullah Economic City (KAEC) is the largest privately funded new city in the world. Situated on the west coast of the Kingdom of Saudi Arabia, KAEC covers an area of 181 square kilometers of land, approximately the size of Washington DC. KAEC comprises King Abdullah Port, the Coastal Communities residential districts, the Industrial Valley and the Hejaz district, which includes the Haramain high-speed rail station. The city is under development by Emaar, The Economic City, a publicly listed Saudi joint-stock company established in 2006.

21,39 Jeddah Arts is an annual initiative held in Jeddah that includes a number of artistic displays infusing the Kingdom of Saudi Arabia. The title 21,39 derives from the city’s geographical coordinates.